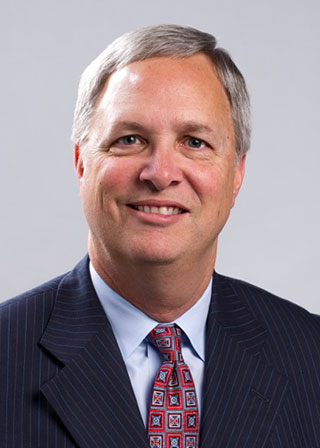 He joined the ASU System in November 2012 after spending 19 years with Arkansas Business Publishing Group in Little Rock, where he was president and publisher. During his tenure, he guided the company into the digital media era and was a frequent speaker at national media conferences on niche media trends. The company won multiple national awards for both its print and online products.

A native of Pine Bluff, Hankins received his Bachelor of Science degree in community journalism from Arkansas State in 1987 and was a Distinguished Service Award recipient. He is a 1986 graduate of the Institute on Political Journalism at Georgetown University.

His 31-year journalism career also included work at the Arkansas Democrat, the Pine Bluff Commercial, the Pocahontas Star Herald and the Northeast Arkansas Tribune. He also made regular television appearances on KTHV, Channel 11, and KATV, Channel 7, in Little Rock and on AETN’s “Arkansas Week.”

In 2017, Gov. Asa Hutchinson appointed Hankins to the Arkansas Freedom of Information Task Force. Hankins is a past president and board member of the ASU Alumni Association. In 2004, he served on the Governor’s Blue Ribbon Committee on Higher Education. He is also past president of the international Alliance of Area Business Publications and a past member of the board of directors of the international Parenting Media Association and the Baptist Health Foundation Board of Trustees.