JONESBORO, Ark. – In honor of his wife Christy, William Clark of Little Rock today revealed he is making a $100,000 endowment gift to Arkansas State University.

The endowment will support a student scholarship in an academic program to be decided by Mrs. Clark.

A member of the Arkansas State University Board of Trustees, Mrs. Clark learned about her husband's surprise tribute during a meeting of the Board today at ASU Three Rivers in Malvern. 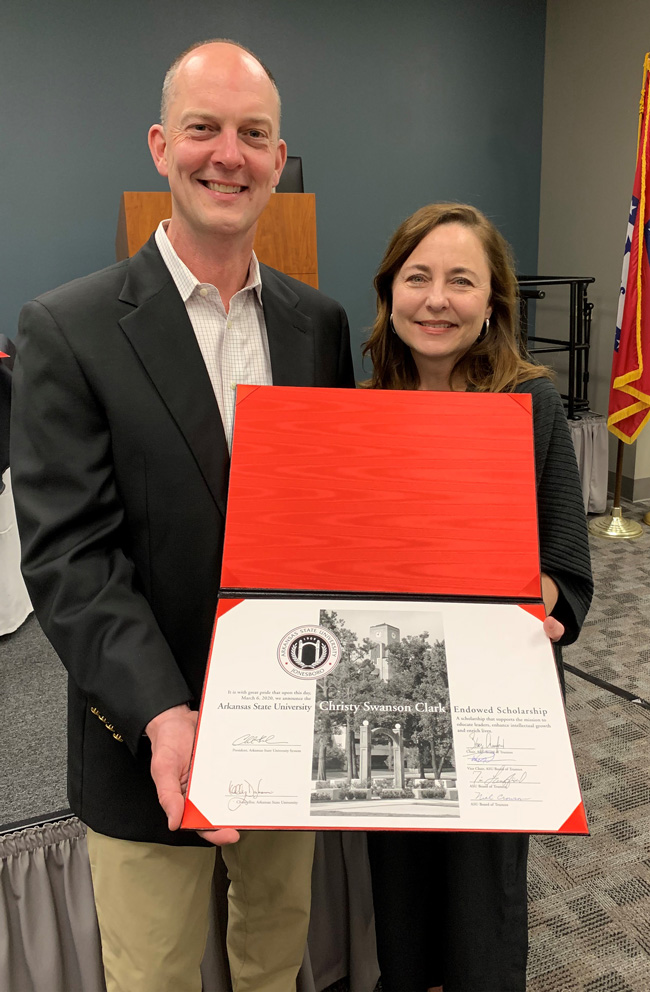 “We are honored that William Clark is making this substantial investment in Arkansas State,”  Chancellor Kelly Damphousse said.  “I am thrilled that he is honoring not only an alumna, but a member of our Board of Trustees.”

At the donor's request, the gift will be named the Christy Swanson Clark Endowment Scholarship Fund, in honor of the 1992 A-State alumna who was appointed to the Board by Gov. Asa Hutchinson in January 2018.

The scholarship will be awarded to students from high schools in Woodruff County, where Mrs. Clark was born and raised.

“Christy exemplifies commitment to Arkansas State and student success, and she loves her Woodruff County community,” added ASU System President Chuck Welch.  “William’s gift is an appropriate tribute to her and her service on our board, and we appreciate them both.”

A native of McCrory, Mrs. Clark has extensive experience in business and community service leadership.

Clark and her husband received the 2018 Arkansas JDRF Imagine Gala Living & Giving Award on behalf of Clark Contractors.  The couple has three children, Will, Ben and Alex.